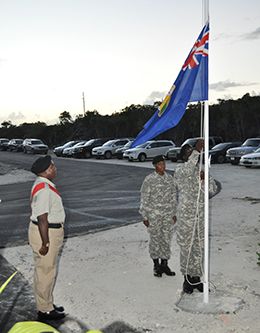 Members of the Turks and Caicos Cadet Corps are singing the praises of Deputy Premier and Minister of Education, Youth, Sport and Library Service, Hon. Akierra Missick, whose action they claimed, gave them a place to conduct classroom-style drills.

The Corp conducts its outdoor drills on the grounds of the Police Canteen on Airport Road in Providenciales. But it had been looking for a place for class-room drills, but had found it difficult to do so.

The fingered the Police Canteen as an ideal place to host those drills, but were denied access, ostensibly by the property’s custodians.

The source said that Corps members often expressed that the lack of acquiring a place to conduct such classroom teaching had become frustrating for some of it members, and so, they felt compelled to make the public know of their challenges, with a view to get the matter addressed, and were happy they the authorities did tackle the problem.

“First, I want to thank The SUN for highlighting the problem, and then we want to thank the Minister who responded almost immediately after the story was published in the paper. She said she did not know that we could not use inside the Police Canteen for our classroom setting teaching. She was really upset about it.

After a little over a decade of operating in the Turks and Caicos Islands, the Cadet Corps collapsed in 2011, during the reign of the United Kingdom-instituted Interim Administration. The official re-launch of the entity took place on Tuesday, October 21, 2014, at the Police Canteen.

The premier, at the time, encouraged all local interest not to let the corps go dormant again.