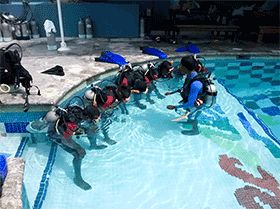 Eleven members of the Turks & Caicos Islands Cadet Corps got an exciting firsthand dive experience at Beaches Turks & Caicos Villages Resort and Spa as a part of their extracurricular training.

The initiative, spearheaded by Regiment Sergeant Major, Michael Reid who is also an employee at Beaches was determined to not only to introduce Cadets to diving but also show case various career options that are available in the watersports industry.

“Diving is a huge industry in the Caribbean and being able to dive can open so many doors for these kids,” said Reid. “I am very happy that Beaches was able to take on eleven of our Cadets to show case the industry not only did the cadets gain valuable skills but they also broadened their career options and even opened the door to a new hobby if they should choose pursue a PADI Open water certification.”

“I hope that they enjoyed the experience, but my biggest hope is that they seize the opportunity they’ve been given and use their new skills to form a career,” he concluded.

Under the guidance of Dive Shop Manager Leonard Suckrajh, the Cadets underwent vigorous training. The course offered insightful theory, followed by a series of confined and open water exercises which included a 20 foot dive along the Grace Bay Beach.

“This is such a great initiative and I am happy that we are able to donate our time and equipment to the TCI Cadet Corp,” Suckrajh said. “All of the kids were eager to learn and very respectful of their instructor. Half of this island’s beauty lies beneath the surface of the ocean and I think everyone here should have the chance to experience it. I am happy that we were able to introduce students to this wonderful underwater world” said Suckrajh.”

This is the first time Beaches Resorts has offered this program to the cadets, but Suckrajh plans to continue the partnership. The program took place over four weeks. Cadets were split into two groups and each group was given two classes. During the first class the cadets began in a training pool and then participated in a mini dive.

The Cadet Corps program is offered to any high school student ages 12–18. It promotes five core values: leadership, discipline, volunteerism, patriotism and virtue. The corps is made up of four battalions and over 190 cadets on North and South Caicos as well as Grand Turks and Providenciales.